Gujarat Chief Minister Vijay Rupani here today announced through videoconferencing an assistance scheme to encourage use of battery-operated two-wheelers and three-wheelers in the state to check air pollution. 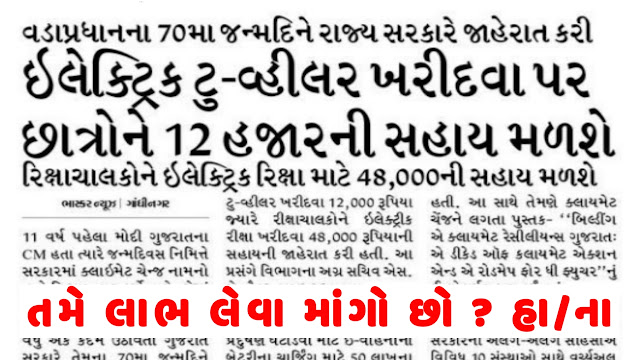 Announcing the scheme as part of five development projects, ‘Panchsheel’ Gift, to celebrate Prime Minister Narendra Modi’s birthday today, Mr. Rupani also announced Rs.50 lakh scheme for charging e-vehicles for creating necessary infrastructure. It was on this day, 11 years ago the then Gujarat’s Chief Minister Narendra Modi had set up the country’s first a separate Climate Change Department, long before the climate change appeared as a challenge before the world.

He said that Gujarat is marching ahead with green energy as clean energy. Blessed with round-the-year sunshine, the state has established unique lead in solar energy, being Number One in the country in rooftop energy, generating low-cost electricity helping household sell the surplus power to the grid. The state has created 510 megawatt capacity1.38-lakh housing units through subsidy during the last three years. Current year’s allocation is Rs.912-crore for 2-lakh housing units.
Yojana