The central government has placed 9 districts of Gujarat in the red zone, 19 in the orange and 5 districts in the green zone, after the third can get concessions in the non-red zone

- May 02, 2020
The central government has placed 9 districts of Gujarat in the red zone, 19 in the orange and 5 districts in the green zone, after the third can get concessions in the non-red zone. 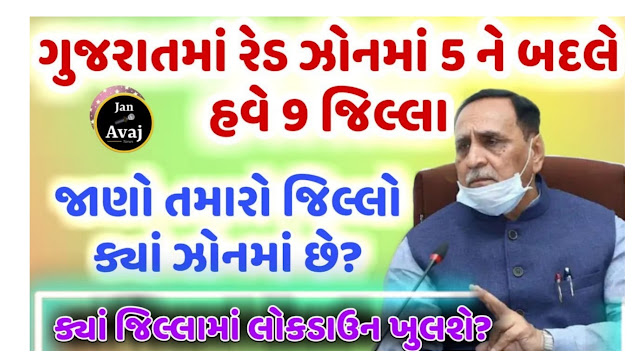 The second phase of the nationwide lockdown is coming to an end on May 3. Prime Minister Narendra Modi recently discussed the matter with all the state chief ministers. As well as Covid 19's team and the Centre's health team held a video conference with the health minister and health secretary of each state to get a glimpse of the state of corona in the state and divided the corona-affected districts into red, orange and green zones. The central government can also implement concessions and strict implementation in the districts on a zonal basis after the lockdown. According to the advisory issued by the Central Government, 9 districts of Gujarat fall in the red zone, 19 districts in the orange zone and 5 districts in the green zone. Strict enforcement will be in the red zone, while the orange zone may get some relaxation. As well as the green zone may get a little more partial relief than the orange.

The government has updated the list of hotspots across the country after a secretary level video conference meeting on April 30 with the states for the week after May 3.

As per a letter released by the Union Health Ministry, "The districts were earlier designated as hotspots / red-zones, orange zones and green zones primarily based on the cumulative cases reported and the doubling rate.

Since recovery rates have gone up, the districts are now being designated across various zones duly broad-basing the criteria."

Based on the new guidelines issued by the Ministry of Health, all districts in the country have been classified as hotspots and non-hotspots based on whether or not confirmed COVID-19 cases have been reported there.

Moreover, it says that the classification is multi-factorial and takes into