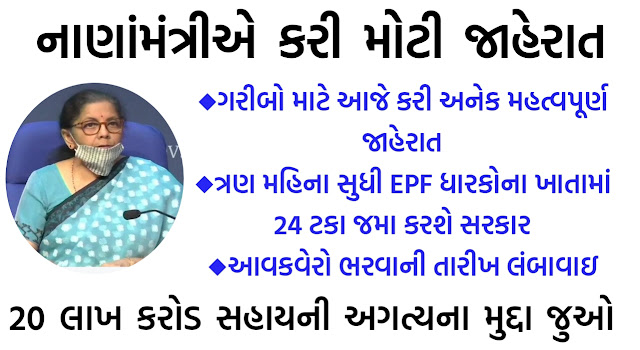 Prime Minister Narendra Modi last night announced a lockdown-4.0 and a Rs 20 lakh crore relief package for the country. Union Finance Minister Nirmala Sitharaman said that the relief package has been prepared in consultation with various sections of the society.
Growth is to be enhanced through the package. To make India self-reliant. That is why it is known as Atmanirbhar Bharat Abhiyan.

| आत्मनिर्भरता | (Atmnirbharta) आत्मनिर्भरता meaning in hindi Income tax filing date extended| atmanirbhar | Atmanirbhart| Well I have One plus 7T phone and its awsome. Fuck with atmanirbharta, untill we can have products which are as good as competitors. Produce quality and innovative products or people will never buy local products. No intention to use FREEDOM 250| Atmanirbharta and Atmanirbhar were used 7 and 19 times by PM in his address

'Atmanirbhar' at least 19 times and 'Atmanirbharta' seven times. Full text of PM Modi’s address to the nation The PM said that in order to fulfil the dream of making the 21st century India, the way forward was to become self-reliant.

The official transcript of the speech in English that was released said Prime Minister announced a special economic package and gave a clarion call for Atmanirbhar Bharat. He noted that this package, taken together with earlier announcements by the government during COVID crisis and decisions taken by RBI, is to the tune of Rs 20 lakh crore, which is equivalent to almost 10 per cent of India's GDP. He said that the package will provide a much needed boost towards achieving 'Atmanirbhar Bharat.
PIB India #StayHome #StaySafe

Announcing a Rs 50,000 crore special liquidity relief package for the NBFC sector, the finance minister said the Rs 30,000 crore liquidity scheme for NBFCs has already been given. Now a liquidity scheme of Rs 45,000 crore. The Government of India will take responsibility for the 20% loss.

The central government will provide 24 per cent of the PF of employees earning less than Rs 15,000

The central government will pay 24 per cent of the PF of employees earning less than Rs 15,000 for three months, June, July and August. The announcement will benefit 72.22 lakh employees of 3.66 lakh companies. Employees other than this will have to deposit 10-10 per cent instead of 12-12 per cent. So that more pay will come into the hands of the employee. However this does not apply to government employees.

The Union Finance Minister said in a press conference that Rs 2,500 crore would be credited to EPF holders' accounts for three more months in June, July and August at 24 per cent. This will benefit 72.22 lakh employees of 3.66 companies.

Rs 50,000 cr. Equity infusion for MSMEs through Fund of Funds; to be operated through a Mother Fund and few daughter funds; This will help to expand MSME size as well as capacity. #AtmaNirbharBharatAbhiyan #atmanirbharbharat

MSMEs that are capable, but troubled by Corona, will be supported by a Rs 10,000 crore fund for business expansion - Finance Minister

The definition of MSMEs will change so that the benefits they get will increase: Finance Minister

Nirmala Sitharaman said that these 45 lakh units of MSME are the basis of jobs for 120 million people. The definition of MSMEs will change so that the benefits they receive will increase. MSME is determined as per investment limit. MSME will be counted even if the investment is more. Now the turnover will also be considered. Both manufacturing and service MSMEs will be treated equally. 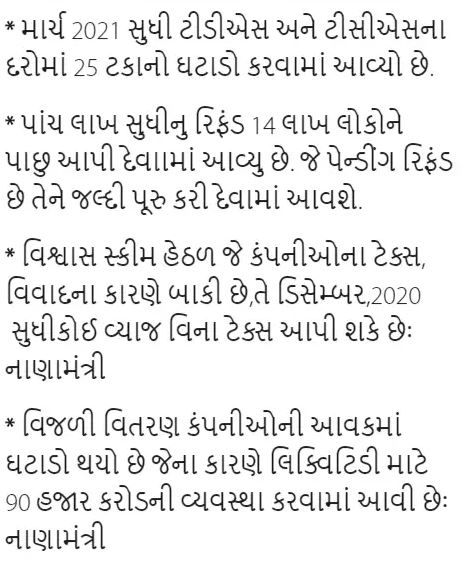 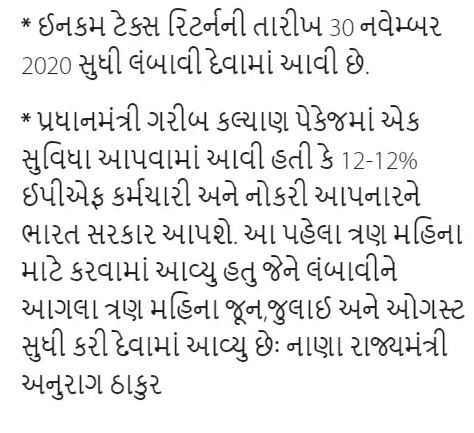 Making a big announcement in the relief package, the finance minister said that unsecured loans of Rs 3 lakh crore would be given to MSMEs. MSME will get collateral free automatic loan of Rs 3 lakh crore for a period of 4 years. 45 lakh MSME industries will directly benefit.

These industries are the foundation of the country. He also said that these 45 lakh units of MSMEs are the backbone of 12 crore jobs. 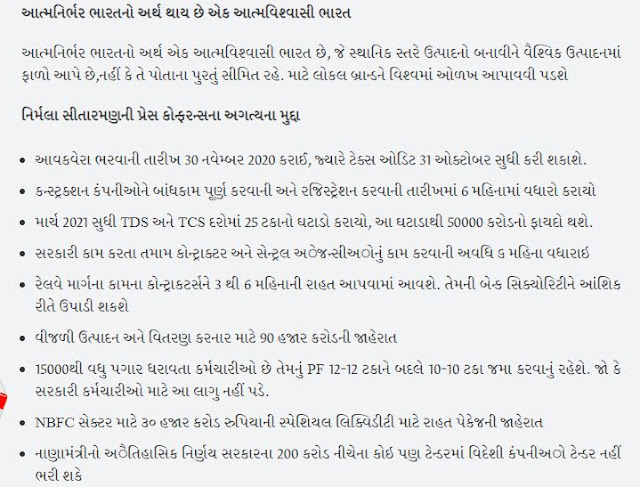 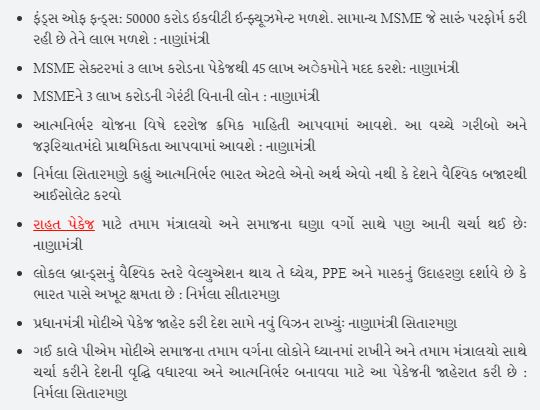 Atmanirbharta and Atmanirbhar were used 7 and 19 times by | atmanirbharta-atmanirbhar-were-used-7-0451| 8 hours ago - New Delhi, May 13: One of the keys words in Prime Minister Narendra Modi's speech ws 'Atmanirbharta'. During the speech that lasted 33| आत्मनिर्भरता - Meaning in English - Shabdkosh| dictionary | आत्मनिर्भरता-meaning-in| hindi to English Dictionary: आत्मनिर्भरता. Meaning and definitions of आत्मनिर्भरता, translation in English language for आत्मनिर्भरता with ...