How INTERNET Works via Cables || Internet

- January 18, 2020
In describing the system of wires that comprises the Internet, Neal Stephenson once compared the earth to a computer motherboard. From telephone poles suspending bundles of cable to signs posted warning of buried fiber optic lines, we are surrounded by evidence that at a basic level, the Internet is really just a spaghetti-work of really long wires. But what we see is just a small part of the physical makeup of the net. The rest of it can be found in the coldest depths of the ocean. Here are 10 things you might not know about the Internet’s system of undersea cables. 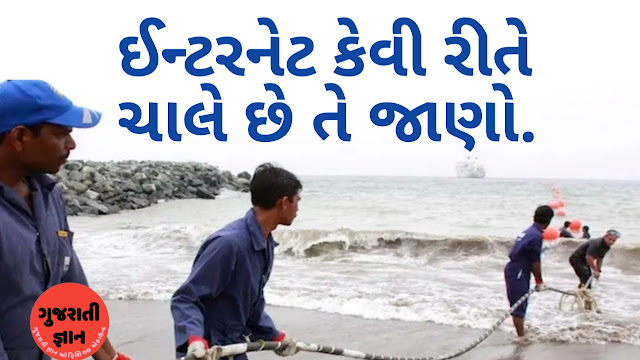 Ninety-nine percent of international data is transmitted by wires at the bottom of the ocean called submarine communications cables. In total, they are hundreds of thousands of miles long and can be as deep as Everest Is tall. The cables are installed by special boats called cable-layers. It’s more than a matter of dropping wires with anvils attached to them—the cables must generally be run across flat surfaces of the ocean floor, and care is taken to avoid coral reefs, sunken ships, fish beds, and other ecological habitats and general obstructions. The diameter of a shallow water cable is about the same as a soda can, while deep water cables are much thinner—about the size of a Magic Marker. The size difference is related to simple vulnerability—there’s not much going on 8000 feet below sea level; consequently, there’s less need for galvanized shielding wire. Cables located at shallow depths are buried beneath the ocean floor using high pressure water jets. Though per-mile prices for installation change depending on total length and destination, running a cable across the ocean invariably costs hundreds of millions of dollars
It seems like every couple of years, some well-meaning construction worker puts his bulldozer in gear and kills Netflix for the whole continent. While the ocean is free of construction equipment that might otherwise combine to form Devastator, there are many ongoing aquatic threats to the submarine cables. Sharks aside, the Internet is ever at risk of being disrupted by boat anchors, trawling by fishing vessels, and natural disasters. A Toronto-based company has proposed running a cable through the Arctic that connects Tokyo and London. This was previously considered impossible, but climate change and the melting ice caps have moved the proposal firmly into the doable-but-really-expensive category.
During the height of the Cold War, the USSR often transmitted weakly encoded messages between two of its major naval bases. Strong encryption was a bother—and also overkill—thought Soviet officers, as the bases were directly linked by an undersea cable located in sensor-laden Soviet territorial waters. No way would the Americans risk World War III by trying to somehow access and tap that cable. They didn’t count on the U.S.S. Halibut, a specially fitted submarine capable of slipping by Soviet defenses. The American submarine found the cable and installed a giant wiretap, returning monthly to gather the transmissions it had recorded. This operation, called IVY BELLS, was later compromised by a former NSA analyst named Ronald Pelton, who sold information on the mission to the Soviets. Today, tapping submarine communications cables is standard operating procedure for spy agencies.

With respect to electronic espionage, one big advantage held by the United States is the key role its scientists, engineers, and corporations played in inventing and building large parts of the global telecommunications infrastructure. Major lines of data tend to cross into American borders and territorial water, making wiretapping a breeze, relatively speaking. When documents stolen by former NSA analyst Edward Snowden came to light, many countries were outraged to learn the extent to which American spy agencies were intercepting foreign data. As a result, some countries are reconsidering the infrastructure of the Internet itself. Brazil, for example, has launched a project to build a submarine communications cable to Portugal that not only bypasses the United States entirely, but also specifically excludes U.S. companies from involvement.
The good news is that it’s hard to cut through a submarine communications cable, if only because of the thousands of very lethal volts running through each of them. The bad news is that it is possible, as seen in Egypt in 2013. There, just north of Alexandria, men in wetsuits were apprehended having intentionally cut through the South-East-Asia-Middle-East-West-Europe 4 cable, which runs 12,500 miles and connects three continents. Internet speeds in Egypt were crippled by 60 percent until the line could be repaired.
As of 2014, there are 285 communications cables at the bottom of the ocean, and 22 of them are not yet in use. These are called "dark cables." (Once they’re switched on, they’re said to be “lit.”) Submarine cables have a life expectancy of 25 years, during which time they are considered economically viable from a capacity standpoint. Over the last decade, however, global data consumption has exploded. In 2013, Internet traffic was 5 gigabytes per capita; this number is expected to reach 14 gigabytes per capita by 2018. Such an increase would obviously pose a capacity problem and require more frequent cable upgrades. However, new techniques in phase modulation and improvements in submarine line terminal equipment (SLTE) have boosted capacity in some places by as much as 8000 percent. The wires we have are more than ready for the traffic to come.